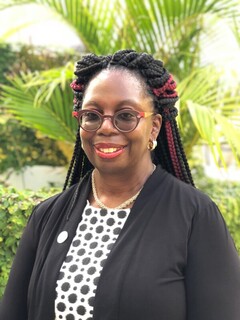 Michelle S. Davis currently serves as Senior Advisor for Public Health Strategy within the U.S. Department of Health & Human Services, Office of the Assistant Secretary for Health. She provides leadership on cultural competency, diversity, equity and inclusion (DEI), public health disaster preparedness, response and recovery as well as the preparation of federal employees for response to natural and man-made disasters. At Health Equity Initiative, she chairs the organization's advisory council.

From 2016 through early 2019 Dr. Davis served, on assignment from HHS, as the Health Commissioner and Chief Public Health Officer for the U.S. Virgin Islands Department of Health. She was a trusted advisor to former Governor Kenneth E. Mapp and provided leadership and change management for a public health agency of 450+ employees. She managed the Departments budget of $74+ million which included local, federal, foundation and other funds and oversight of over 50 federal grants. She successfully led programs addressing many public health issues including; chronic and infectious disease, emergency medical services, WIC, laboratory services and preparedness and response. From the summer of 2017-2019 she added the role of incident commander to her duties whereby she oversaw preparedness, response, recovery and mitigation activities as a result of 2 category 5 hurricanes (Irma and Maria) which severely devastated the 4 islands of the territory.

Dr. Davis has held several leadership positions within HHS including Regional Health Administrator (NYC), Deputy Regional Health Administrator (Philadelphia) and Senior Epidemiologist (CDC) where she worked to improve health equity for underserved communities. As a result of her efforts she was recognized with the RADM Robert L. Davidson Inspiration Award from the Greater NY Commissioned Officers Association; the Assistant Secretary for Health-Special Acts of Service Honor Award and the CDC/ATSDR Honor Award for Management Excellence.

In additional to her federal service, Dr. Davis has practiced public health at several local and state health departments including the Philadelphia Department of Public Health as Deputy Health Commissioner for Policy and Planning and the Pennsylvania Department of Health as Deputy Secretary for Health Planning, Policy and Assessment. In these roles she utilized her epidemiology and research training to translate data into policy and public health initiatives.